We’re pairing 8-bit music thematically, rather than based entirely on series. You can find this track and more Tater-Tot Tunes on YouTube! Stop by and jam to some great tunes.

Happy Saturday, everyone! Today we’re joined by a very talented newcomer to Normal Happenings collabs: Midnight Mountain Cosplay! Seriously, this coplayer is exceptionally talented, as demonstrated by her Twitter and Instagram pages. Be sure to follow! Thanks for coming on board with a contribution for this collab.

Also, it’s good to see the Borderlands series get more love after My Life as a Quest wrote about the game for The Games That Define Us. 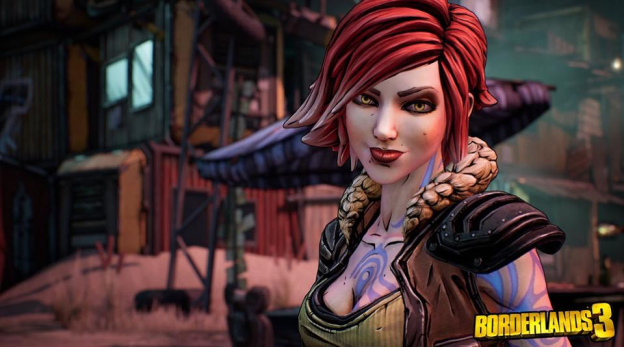 Back in 2017, I was on summer vacation before my senior year of college, and I was bored. Sure, I had a job, and friends, and cosplay, but I was bored. In this eternal boredom, I stumbled upon an old game my sister had — Borderlands 2. Being in the cosplay community, I had definitely see and heard of this game, but I never had any real interest in it. But, as it goes with being severely bored, I was desperate for anything, so I started playing it. And two years later, I’ve cosplayed from it, cried about it, waited anxiously for the third installment, am planning a tattoo from it, and even named my dog after it. What can I say? When I discover I like something, I really like it.

Since I started with 2, I didn’t really have much of the backstory, but I didn’t really need it. To be honest, it might have been the reason I fell so hard into the game. While I played 3 after playing 2 and was able to experience the Borderlands famous trope of making the old player characters NPCs, I didn’t get that with 2. So as a result, it was unexpected when the characters were introduced, and thus made Lilith’s impact even greater for me.

I know what you’re thinking-how did you fall in love with Lilith from the second game when she was a player character in the first? Well, it happened like this. When the mysterious Firehawk was introduced in the second game, they were framed as a bloodthirsty bounty hunter and one of the most feared characters on Pandora. And as a man. When Lilith finally showed up, I was shocked. The most terrifying figure was A WOMAN???? And then I saw her powers and her fiery (lol) personality and heart and bravery and she was solidified as my favorite character in Borderlands, and in video games in general.

When I agreed to this prompt, I may have not fully understood what choosing Lilith meant. I chose my favorite video game character, but maybe not the character that defined me. Lilith was brave, and brash, and caring, but ruthless. I am not. Lilith is a hero. I am also not. Lilith was more of a goal to me, if anything, but she wasn’t me. As much as I want to be the hero of my own story, I would never, ever, be to her level. But that changed when I played Borderlands 3 last month.

I waited on pins and needles for six months for Borderlands 3, and played it for four days straight to finish it. It was an emotional roller coaster to say the least, but a good one. If you’ve watched any of the trailers for the game, the basic synopsis is there is an evil cult taking over the galaxy and you need to stop them. The leaders of the cult are Siren twins with the powers to suck life out of people, and they manage to take Lilith’s powers from her. The Firehawk got plucked, as the twins repeat often.

It took me a few weeks of decompressing from the game to realize why that scene hit me so hard, and why Lilith during this game meant even more to me than before. Lilith lost the one thing that everyone said made her so special, she lost the one thing she could depend on, the one thing that made her a hero. Without her powers, she was normal, after spending her life being told she wasn’t. I realized weeks later, the reason it hit me so hard was because, that was me.

While my situation wasn’t as dire as hers, I related to it pretty hardcore. Without seeming egotistical or facetious or the like, I grew up a pretty smart kid. I was told daily how smart I was, how I was going to be the next doctor or scientist. I took the highest classes and passed while barely studying. I was forth in my class in high school, and I took pride in being smart, but I took it as my only trait of importance. I thought it made me special, and different. Being young and dumb, I thought I was better than others.

In college, I continued to do well, majoring in biochemistry and music, and planning on becoming a doctor, something I was told was one of the few worthy things to do in life. Then, one day, I got a C in a major class. Then a D minus. Then I decided I didn’t want to be a doctor. Then I graduated college and had no idea what I wanted to do. Then I worked retail, which I still do. I had a major breakdown. Maybe, I wasn’t actually smart. Maybe I was a dumbass the whole time. I saw the work my college peers were doing and how hard it was to get into medical school and I realized I wasn’t at that level. Everything I was told my whole life seemed to crash down before my feet. I, on a much smaller scale, was like Lilith in that moment.

I know how conceited this all makes me seem, and I get it. In those moments growing up, I was a lot dumber than I gave myself credit for. I was, ‘dumb of heart’ as one might say. It took me destroying the idea that my only worth was my intelligence to realize that I was actually dumb as shit the whole time. Who cares if you’re not smart? I’d rather be kind, and happy, and doing something I love. I don’t want to be better than anyone else, what kind of jerk idea is that? I know if I had somehow made it to medical school, I’d be suffering right now. Instead, I’m working a job I love with people I love.

In a way, I think Lilith realized this too. She states when she gets her powers back at the end of the game “they were gone for so long, I had become used to being without them.” In my opinion, she was stronger without her powers than she ever was with them. Without that backbone, she had to learn to create her own. When you lose the one defining point of your life, you have to find out who you really are, and I think she did, and in a way, so did I. I’ve taken pride in not always being right, in focusing on the things that make me happy rather than the things I am good at. And in another, Lilith became even more of a hero than she ever was before, it took finding out who she really was the whole time. And while I’m not becoming a hero anytime soon, I’m learning who I am as well.