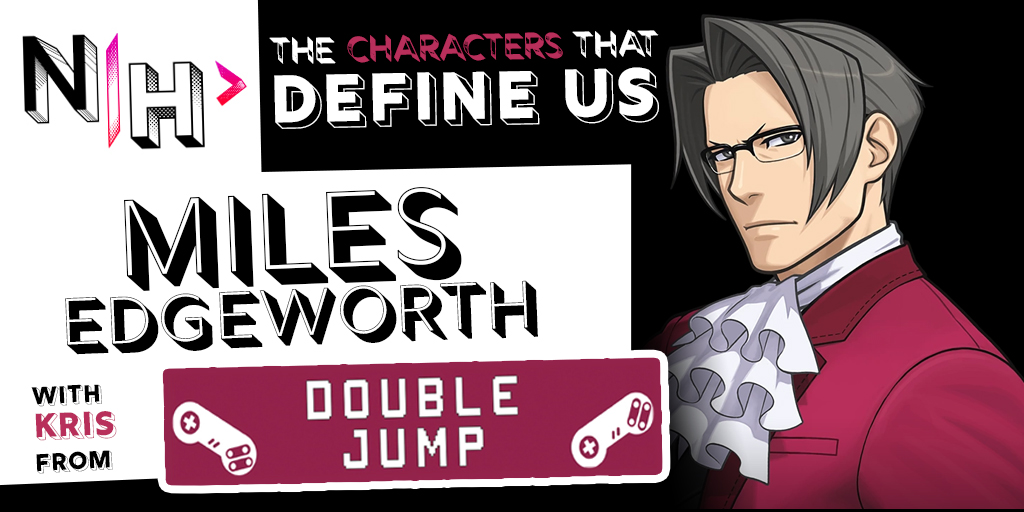 We’re pairing 8-bit music thematically, rather than based entirely on series. You can find this track and more Tater-Tot Tunes on YouTube! Stop by and jam to some great tunes.

Today we’ve got part two of the Double Jump duo! It’s Kris, who you should most definitely be following. Kris and Rachel, who recently provided her piece on Luigi, have such a cool dynamic and their blogs are always fun to read.

Kris, thank you for your excellent piece! With no objections you may begin your testimony.

I had been so sure about my choices when it came to choosing a video game character that resonated with me. Personal preference comes into play, of course, but I was also able to see myself in my choices.

Miles Edgeworth has been a favorite of mine since I discovered him. My parents have often mentioned that I should have been a prosecutor considering my love of debate and proving people wrong, and he is a prime candidate to headcanon as asexual like me. We both enjoy tea. We both now wear glasses. It was going to be simple to compare us.

Then I actually started to write this piece.

Suddenly, I was second-guessing myself and my life choices. A little dramatic, perhaps, but amid my other work and life obligations, not having this piece done as quickly and easily as I thought I would have gave me some anxiety. Instead of articulating what my character and I have in common, I started thinking about how I related to the other characters that were almost the star of this piece, thinking of what ifs and wondering if I should have picked someone easier, if there was such a character. Considering my own life is full of detours and me trying to figure out what I want, this was on par for me.

It took me an embarrassingly long moment to realize that Miles Edgeworth’s journey in the Ace Attorney series is the same.

Miles Edgeworth was a prosecutor prodigy, one who was well off from his status and work. At first glance, he was aloof and confident in his actions (including his fashion sense). While I am definitely not a genius, despite my family giving me the nickname “Google,” I did very well with school like Edgeworth, picking up most subjects with ease and gaining an expectation within my family that I would continue my schooling for better things. Tech came easy to me and I would be making bank right now if I actually stuck with my I.T. degrees and classes.

I was polite and friendly but casual to new people I met in high school and college. Admittedly, there were people that I’ve encountered and deemed as temporary acquaintances — people who were nice to hang out and talk with during the semester, but I had no interest in staying in touch once school was out. I’ve had people in college call me out on it, people that were apparently more invested in our relationship than I was. It baffled me, in all honesty. I was focused more on my work life than personal friendships while getting through college. Working hard, saving money, those were some of my main values, especially because I was still trying to figure out my own long-term goals.

Edgeworth was expected to continue von Karma’s perfect prosecuting record. He had the intelligence and drive to do so, but he forgot his own dreams in the process of his upbringing. I fell into a similar role, going through the motions of what I thought I was supposed to do while growing up instead of figuring out goals of my own to chase after.

Like Edgeworth, there was a point in my life where I felt completely lost.

I flitted through school, doing well with my work and always having the confidence that life would work itself out. While Edgeworth had some sort of a plan ever since he was young, I figured I would realize what I wanted eventually. I had some interests — computers, animals, criminal justice, to name a couple of the most prominent ones — and tried to take classes that catered to those to see if anything stuck. I didn’t worry about the future, sure that I had it handled, until it was staring at me in the face in the form of a high school diploma and a daunting list of possible majors for college that I really didn’t want. There have always been expectations of me that I hoped would align with who I wanted to be.

At this point, those expectations haven’t aligned. Not really.

Of course, my parents and family would no doubt be supportive — even if they’re baffled, depending on my choices — of whatever I want to do, but they are proud of where I am right now. Where I am in my life is logical, some would say lucky, and I appreciate the path that life has given me. Yet, it never felt right.

Like Edgeworth, I had a turning point in my life where I had to pause and look around at the path I was on. Despite how familiar and safe the path is, it doesn’t seem to be leading to where I want.

Right now, I’m fulfilling those family and peer expectations. I’m at a day job purely for the money and benefits, and I have wonderful co-workers. This job will help me survive the system, but I have finally realized that this is not who I want to be.

After being officially found not guilty of his own father’s murder, Miles Edgeworth (while being a little too dramatic) had the means of leaving the country to find himself. While he still prosecuted, he realized his own dreams and goals of always pursuing the truth. It’s taken me years, but I’ve finally started to find my own truth as well.

Writing, art, and gaming were a few lost loves of mine that almost became casualties while I grew up. They were mere hobbies when I was a kid, but I’ve never fallen out of love with them. They were detours on my path of life, ones that I never really entertained as being the destination to a journey that would actually allow me to enjoy and grow into my true self.

While I regret not developing those skills further as I grew, it’s been amazing to rediscover them as I am now. I’ll be at my day job for some time yet, but I am focusing more on my writing and art when I can, and it’s been wonderful diving deep into that creative well. Not only has my sister been an amazing source of support and inspiration as I return to these creative roots, but I have also found an incredible gaming community filled with beautiful people with beautiful hearts and minds. And, yes, despite my day job, I couldn’t be more thankful for where I am in life now.

Miles Edgeworth has taught me that no matter how lost you may get on the path of life, you can always find the support and hope to steer you towards the truth of who you really are and who you want to be. The path may be twistier than you originally pictured it would be, but you’ll get there.